The influence of Liberal Democrats in Government is clear following today’s UK Government Budget, with numerous measures to help people in Wales get on in life. 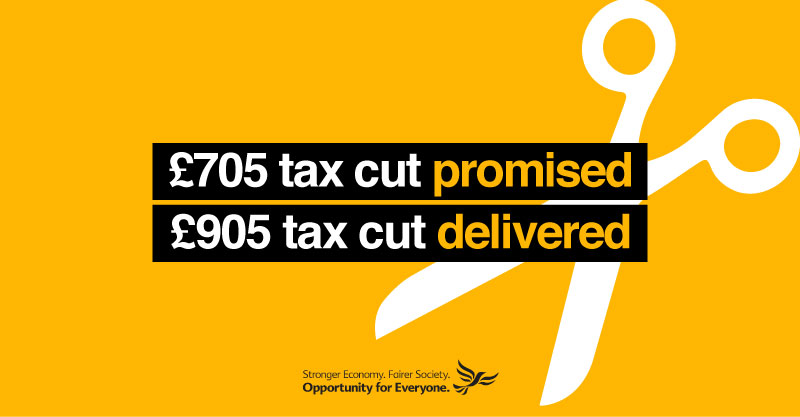 The flagship Lib Dem policy of raising the Income Tax threshold has beenextended again this year, meaning 1.22 million low and middle income earners in Wales will have received a £900 tax cut compared to 2010, and 167,000 Welsh workers will no longer pay any Income Tax at all. 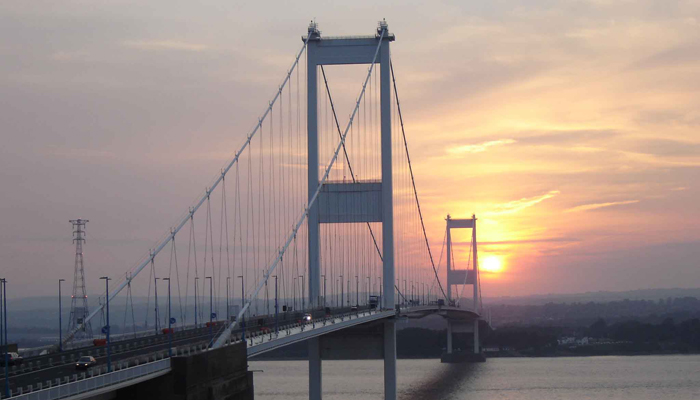 Kirsty Williams, leader of the Welsh Liberal Democrats, has accused the Conservatives of putting politics before patients after they have announced they will not take part in the proposed cross-party NHS commission.

The Health Minister agreed to look at Kirsty’s proposals and they have since undertaken discussions on what the terms of reference of the Commission would be.

The front of the Welsh Liberal Democrats' manifesto contains five priorities to build a stronger economy and a fairer society, creating opportunity for everyone in Wales. 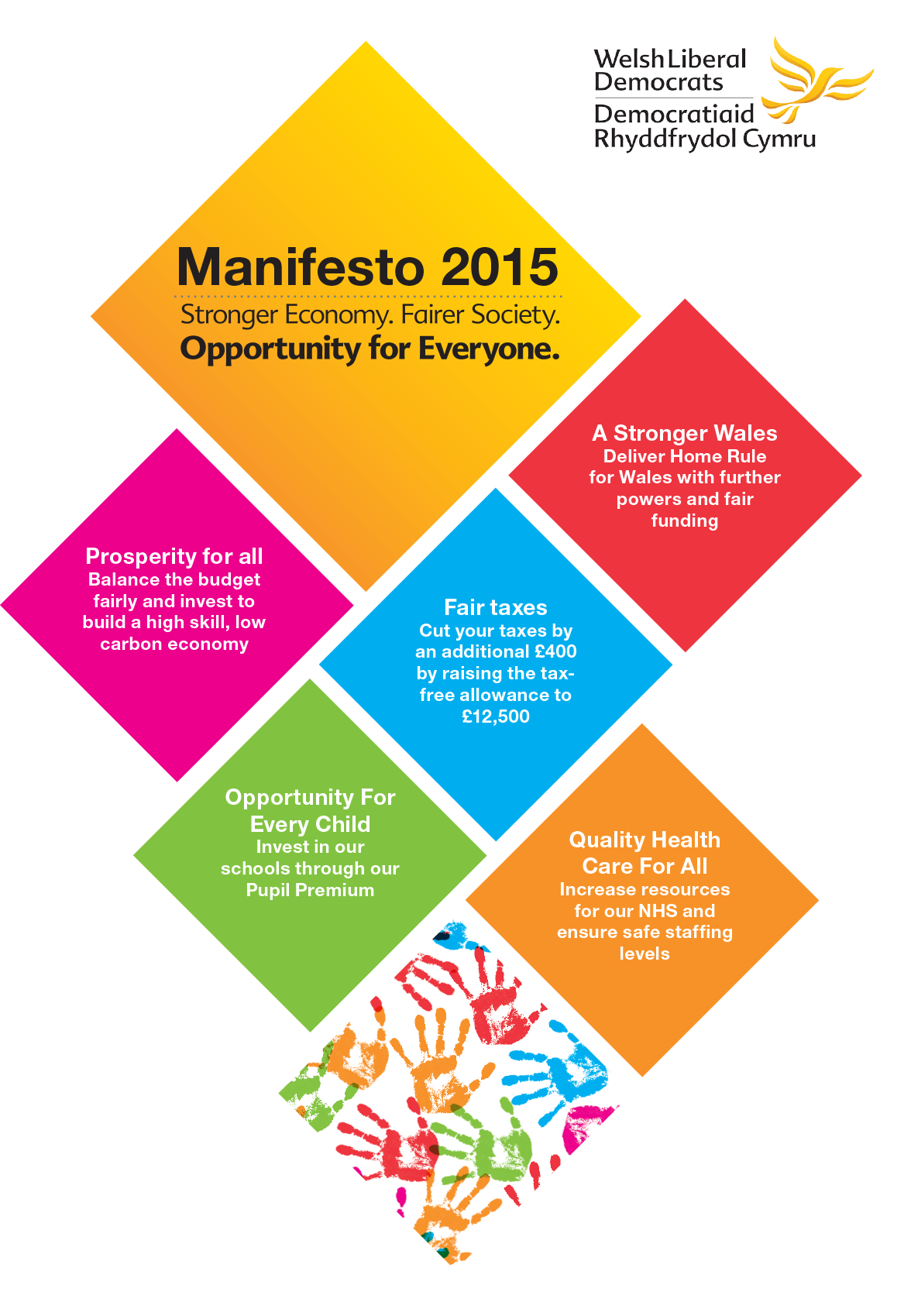 Kirsty Williams, leader of the Welsh Liberal Democrats, has today announced that she has won her party’s commitment to overhaul the current unfair funding system for Wales.

Going into the General Election, the Liberal Democrats will pledge that Wales will have fairer funding for the next parliament, which could mean hundreds of millions of pounds of extra funding for Wales.

The Liberal Democrats will also immediately entrench a Barnett ‘floor’ so the underfunding gap could not increase.

These manifesto commitments will come in the Liberal Democrats’ ‘Pre-Manifesto’, to be published in September.

“I am delighted that we have secured this strong commitment to overhaul the current unfair funding system for Wales.

“This announcement means that, with the Liberal Democrats in government, Wales could receive hundreds of millions of pounds of extra funding over the next parliament.

“The Liberal Democrats not only recognise that Wales is underfunded, but we will commit to putting in place practical measures to address this.  This is about Wales getting a fairer deal and we believe this is the best way forward for that to happen.

“Our communities and public services are being denied the money which we would receive if there was a fair funding system.  For years both Labour and the Tories have defended the status quo and refused to acknowledge that Wales is getting a raw deal.  Once again, the Liberal Democrats are showing that we are the only party in Westminster that will make a positive difference for the people of Wales.”

Veronica German, Welsh Liberal Democrat Parliamentary spokesperson for Monmouth has described the ambulance service in Monmouthshire and Torfaen as being ‘in crisis’ as figures recently published showed response times are over 13% worse than the same time last year.

Figures released today show that in June less than 45% of emergency responses to Category A (immediately life-threatening) calls arrived at the scene within 8 minutes in Monmouthshire and Torfaen,  and way below the target of 65%. In England and Scotland the target for the same priority calls is 75%.

“Once again we see ambulance response times getting worse.  The current target is not at all ambitious, yet still it is routinely missed.

“These figures remain a disgrace.  To have less than half of immediately life-threatening calls responded to within the 8 minute target time is a huge concern.

Kirsty Williams AM’s campaign for more nurses on Welsh hospital wards has reached the next stage as the consultation was launched on the Safe Nurse Staffing Levels (Wales) Bill.

Over 3,000 people have either signed Kirsty’s petition or written to their AM urging them to back the Bill as it progresses through the Assembly. During this 6 week consultation period, Kirsty Williams will tour Welsh hospitals to speak with nurses and feed their views into the consultation.

In December 2013, Kirsty Williams was successful in the National Assembly’s ballot to introduce backbench legislation.  Her proposal could see Wales become the first country in the UK with a legal duty on safe nurse staffing levels.

Over 30 organisations and health professionals took part in the initial consultation on the general principals. Their views have fed into the draft bill text, which is being launched for the first time today. The remit of the Bill has been expanded to ensure safe nurse staffing levels within all NHS settings and recognises the importance of professional judgment and outcomes for patients.  It includes a requirement to maintain minimum nurse to patient ratios in adult inpatient wards in acute hospitals and provision to extend this to other settings within the NHS in Wales as and when guidance is published by the National Institute for Health and Care Excellence (NICE).

Monmouth Liberal Democrats have slammed the decision by Labour's Transport Minister to choose the 'black route' for the M4 relief road.  The £1bn scheme is the largest capital investment programme ever announced by the Welsh government.

The favoured route was one of three options put forward for consultation last September.

The Welsh Liberal Democrats prefer the 'blue route', which is the redevelopment of the A48 Southern Distributor Road and A4810 Steelworks Access Road. This route was put forward as a fourth option for consultation last September.

Alun Davies, the former Labour Minister of Natural Resources and Food, has been sacked by the First Minister.

This is following news that he attempted to mount a smear campaign against five Assembly Members, including Welsh Liberal Democrats Kirsty Williams and William Powell, by requesting private information about agricultural payments.

Kirsty Williams AM, Leader of the Welsh Liberal Democrats, reacted to the sacking by saying:

"The actions of Alun Davies as a Minister are atrocious and completely unacceptable for anyone serving in public office.